Still and even video photography really do not do justice to the colorshift visible in person, but if you look closely you can see some of it.

Colorshift eggs, as well as various colors of "regular" dragon eggs, are available in my Etsy shop!
www.etsy.com/shop/HopeAndGracePens
Posted by Hope and Grace at 5:14 PM No comments:

Who knew dragon eggs would be such a big hit? Yes, it may just be timing with the simultaneous crescendo of Game of Thrones, but whatever it is I hope it lasts. 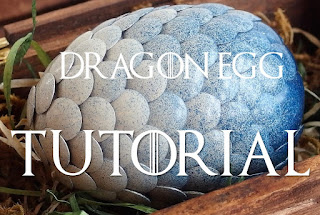 Lots of people want to know how they're made. In fact, I'm pretty sure some people bought an egg just to take it apart! Well, since it's not a trade secret or anything I'm happy to share a little how-to. Heck, if someone has the patience make one of these, they deserve it.

So here we go!

Safety:
Always use spray paint in a well-ventilated area and/or use a breathing ventilator when spraying.
Also, thumbtacks are sharp (duh).

Preparation (approx. 1-2 hours):
We start by laying out our thumbtacks for painting by mounting them on the substrate. Each egg uses approximately 160 tacks, which will vary depending on the size of egg and width of tack head (even 1mm makes a difference after several tacks). I use large, flat Styrofoam for mounting because we had some from another project, but you can also use cardboard or another substrate. The key thing is to press the tacks in only as far as necessary to keep them in place. You don't want the tack head touching the substrate, where the paint will glue it in place. You do want to place tacks as close as possible to each other (without touching) to conserve paint.

I generally lay out about 500 tacks per paint session and get three eggs from this with a little leftover (more on that later). I've tried to come up with quicker ways of mounting them, but nothing I've created has been faster or more efficient than just doing it by hand, one at a time. Once you have them laid out and mounted, it's time to paint them. 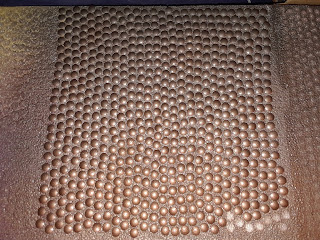 Painting (approx. 30 min. and/or overnight):
Take your mounted tacks to a well-ventilated area (I go outside). Use steady, even passes with the paint, trying not to apply too much at once. Do let each coat dry (usually about 15 minutes) before applying another coat. You'll generally need a good two or three coats to completely hide the shiny nickel tack surface. If you're doing an hombre or 'fade,' be sure to thoroughly overlap paint colors over several coats.

You'll be tempted to touch a tack head to check the paint between coats. Try to resist the urge by trusting the dry time on your paint's instructions. And even though it may say paint will be dry to the touch at 15 minutes, I found that even after 3 or 4 hours, the paint was mold-able enough to copy my fingerprints and ruin the finish. Now I let tacks dry overnight in a well-ventilated area. 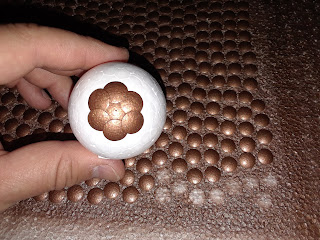 Start at the egg's wider end, placing a single tack in the exact center, then six overlapping tacks surrounding it.

Side note: start at the wide end of the egg because each layer of scales will overlap the previous layer. In animals that lay eggs of this shape, the egg emerges skinny-end-first. Starting at the wide end will orient the scales in the correct direction for an animal to to have lain the egg.


Next, place six more tacks at the outer junctions of that first ring of tacks. 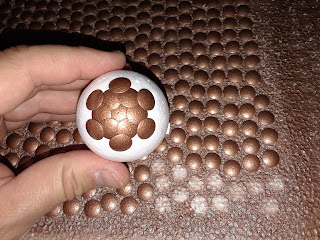 Then, six more tacks filling the gaps of that previous ring. 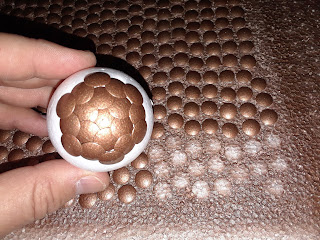 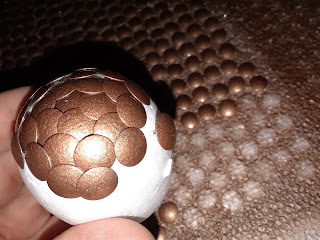 Okay, this isn't rocket science. I do have tips and techniques but they're really difficult to explain in writing and probably too neurotic for most people. Basically you fill in the gaps as you go, trying to work evenly across the circumference of the egg with each layer of scales. Just cover the Styrofoam and don't be afraid to use more scales where needed.

As you get near the end -- maybe the last dozen scales or so -- rub some thick glue onto the exposed Styrofoam to help secure the scales. Most scales don't need glue because each is held in place by scales on top of it. As you near the skinny end, a little glue will help keep every scale where it should be. GLUE CHOICE IS IMPORTANT. I recommend wood glue, but school glue or other non-caustic glues may also work. Choose a glue that won't melt the Styrofoam (hint: super glue will melt Styrofoam)!

Your egg is now ready for display. I recommend a nest of potpourri or hay. Be sure to keep it out of reach of little fingers. So, what to do with those leftover scales? Keep 'em, and keep making eggs. Eventually you'll have enough different-colored scales to make a calico egg.

If you've enjoyed this tutorial, comment below or write me at HopeAndGracePens (at) gmail.com! 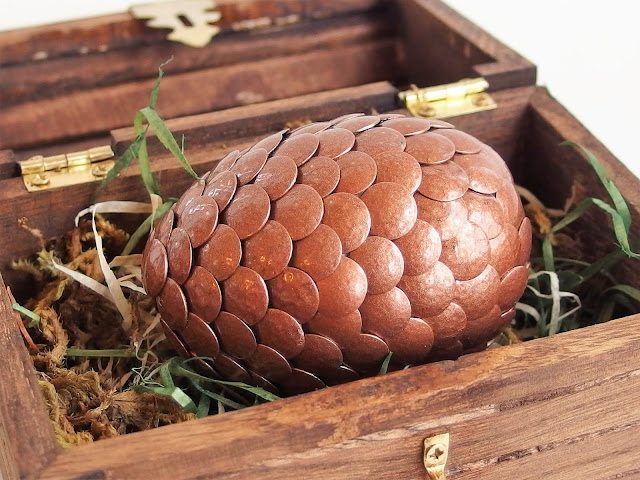 Posted by Hope and Grace at 3:35 PM No comments:

Many moons ago, I ordered some Liquid Diamonds casting resin because a fellow pen turner was hawking it online and I'd toyed with the idea for a long time. I did some casting in the past with colored resin, but wanted to try making clear pen blanks with printed images inside.

Then the liquid diamonds sat on a table in the corner for several months. What can I say? I put the "pro" in procrastination. What made me bust it out and try it now? Maybe I was bored. Maybe I thought I'd better use it up before it goes bad. Maybe I saw my competition make really cool blanks and that smoldering seed of envy buried deep within flared up with an agonizing goading daring me to try my hand. That was very specific, but who knows?

And since everyone raved about how easy Liquid Diamonds was to use, I went with memory and intuition to make a set of blanks. I mean, who needs to read instructions, right? Am I right? 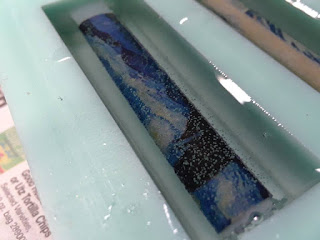 No. Air bubbles. Lots of them. Apparently I'm not right. Hmm. Where were those instructions? 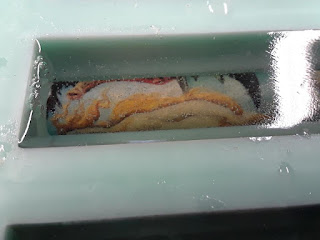 The second attempt was better. I didn't say it was much better. And it certainly wasn't usable. A third attempt burned down, fell over and then fell into the swamp. But the fourth one? The fourth one stayed up. And that's what you're going to get, Lad. The finest castle in these isles. 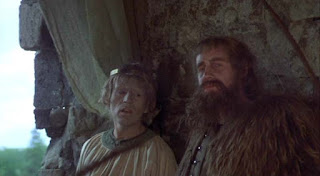 Stop that. Stop it. You're not going into a song while I'm here.

Sorry. Sometimes the Python references come unbidden and one must yield.

As I was saying, the fourth attempt actually produced some usable pen blanks. 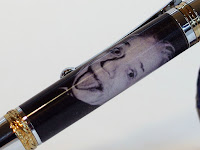 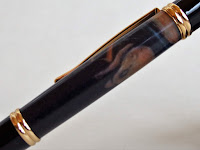 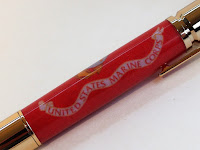 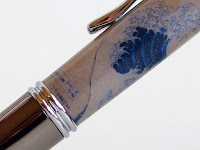 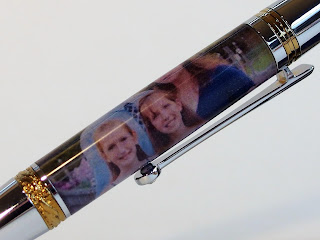 I think I've got it now. The secret involves a heating pad, the clothes dryer and a third object for which I'm sworn to secrecy. So, now you can get that great vacation picture immortalized in a useful, handcrafted writing instrument. Want someone to think of you every time they write? Get your grinning mug cast in acrylic. Don't send unsolicited pictures of genitalia to your crush. Show her you've got class. Have that picture made into a pen and give her that!

Posted by Hope and Grace at 3:35 PM No comments:

Khalisi's got nothing on me

I have a bit of an obsessive-compulsive personality. I wanted to try making one of these and ended up producing about two dozen. Hmmm... 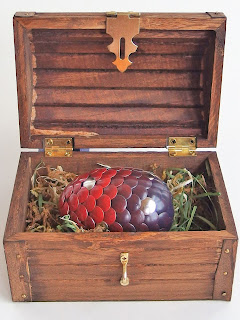 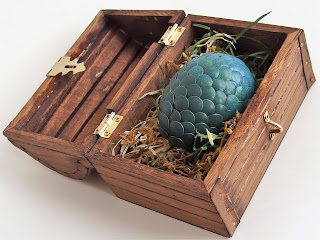 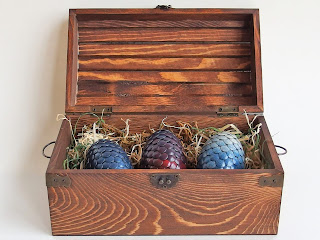 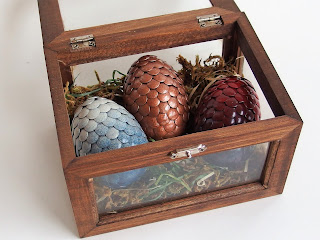 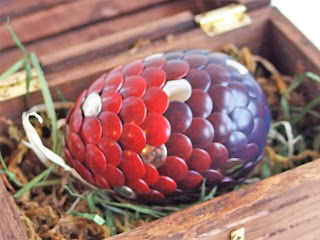 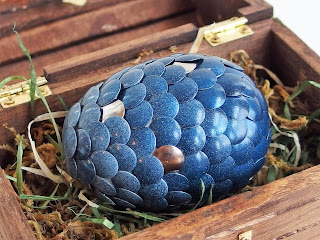 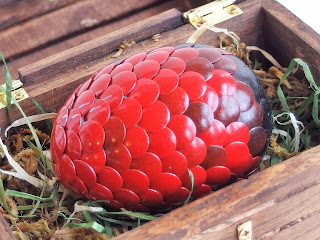 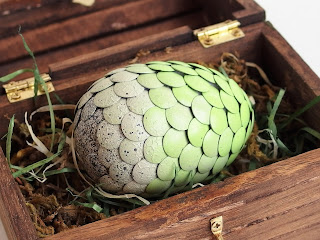 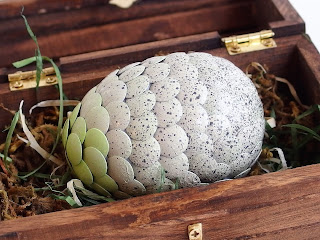 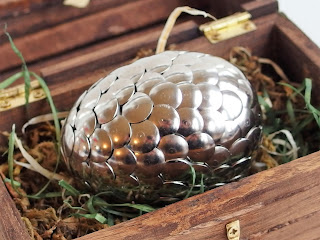 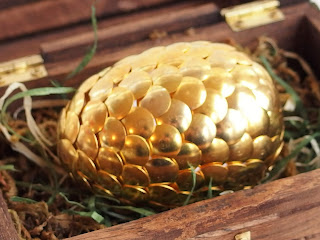 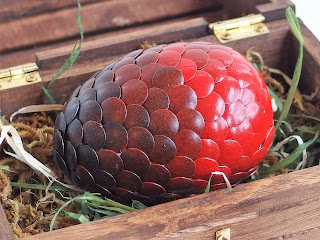 Posted by Hope and Grace at 2:20 PM No comments: